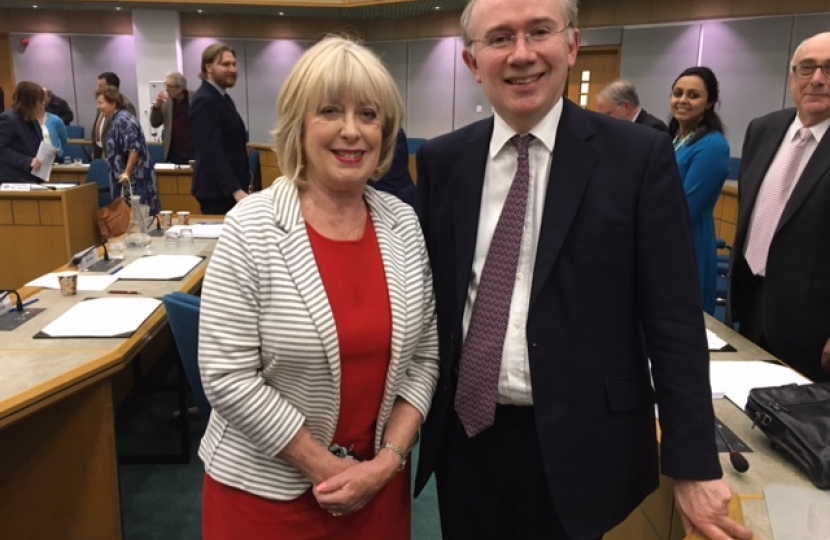 James Browne has used his first speech as Leader of Elmbridge Borough Council to present the Conservative Administration’s 2019/20 Budget.

He set the scene by pointing out that more people are in work nationally than at any time since 1971 and wages are now rising in real terms – however for local authorities such as Elmbridge the outlook continues to be bleak.

In 2010/11 Elmbridge received £6.5million in Revenue Support Grant from Central Government. By 2018/19 this had fallen to £ 2.2 million and this year we only narrowly averted the prospect of negative RSG (paying into the pot). Funding is expected to fall further in the future and the New Homes Bonus, paid to the borough by the government, has also fallen by two thirds from £3million in 2016-2017 to £958K this year.

In addition, Surrey County Council faces unprecedented financial challenges and will have less money available for joint enterprises with Elmbridge. And we face a drop in our recycling income due to a change of policy in China.

James told the Council: “We have responded to these and can, without exception, say we have not cut any services. This has been down to willingness to work across political parties, to be prudent but also to invest wisely for the long-term.”

The Borough has, he said, been “unrelenting” in pursuit of efficiencies, innovation and transformation. By reducing overheads, retendering contracts, using office space more effectively, investing in property to generate income, the Council has made over £15million in savings while at the same time continuing to provide quality services.

James added that: “Over the last 10 years, no borough in Surrey has done more to keep council tax rises down.” Other successes include:

James told councillors that the Administration will retain a reserve fund to mitigate against higher fuel costs or labour shortages that might result from Brexit. He added that Elmbridge is working towards becoming self-funding and supplementing income by retaining a share of the £60million of business rates which Elmbridge collects each year from local businesses and hands over to the Government. This year will retain £2.29million (less than 4%) but an increase could also see additional obligations placed on our local authority.

Our balanced budget for this year will require £700,000 in savings and a £400,000 contribution from reserves. In addition the Elmbridge component of the Council Tax is increasing by 2.93%. This equates to £6.30 a year for a Band D property or an additional 12p per week to protect the services our residents receive. It is lower than the County’s increase and lower than the Police precept. And it is the second lowest Council Tax increase in Surrey.

James concluded: “Our financial position is and has been strong in comparison to other councils and that is a direct result of the way we have managed our services and our finances. Tough decisions and steadfast discipline is needed now to secure the long-term future of our services. We have the responsibility to make the right decisions for our residents so that we can protect those services residents’ value.”

Our Further Financial Support for Jobs and Businesses

We are announcing a package specifically for those businesses which are not forced to close, but face reduced demand due to additional social distancing restrictions.