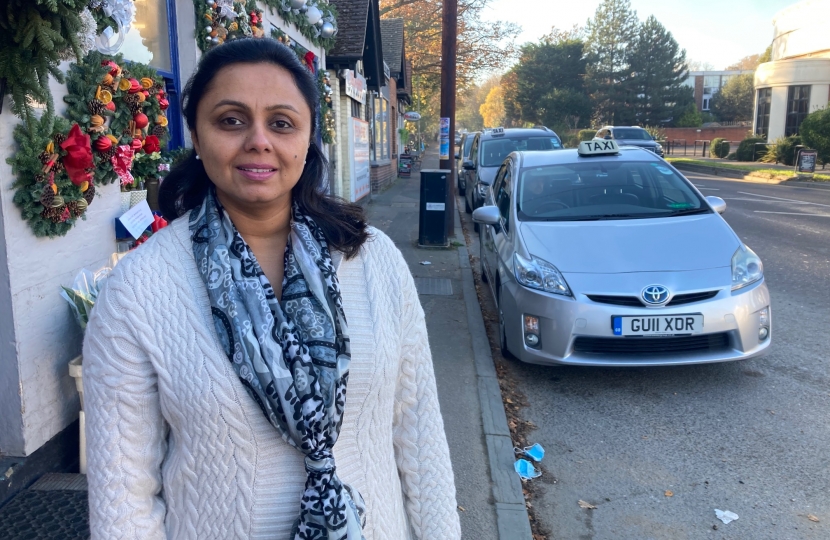 Taxi drivers have been spared an immediate 33% rise in their license fee, thanks to the intervention of Elmbridge Conservative councillors.

Our councillors, including Shadow Cabinet Member for the Environment Charu Sood (pictured), argued that an increase by a third would be a terrible way to treat the borough’s taxi drivers and operators, many of whom were severely impacted by the loss of business during lockdown.

If the hike in fees hadn't been stopped, it would have meant two things - local taxi drivers going out of business, or having to pass the cost onto local people in higher fares.

Conservative Cllr Alistair Mann proposed to defer any increase for a year as this will allow EBC to assess the recovery of license applications by engaging with the taxi operators and build a better understanding of the sector, its path to recovery and their own Licensing regime. At the moment, the local license applications are down by 40% since the start of the pandemic and a sudden hike in their fees was unlikely to reverse the trend.

By persuading two opposition councillors to vote with us, we carried the day by 8-5.

Cllr Sood said: “We were pleased to make the case for our local taxi and private hire operators at the Licensing Committee. The Administration was seeking to claw back lost income by dipping the pockets of our borough drivers – and after the tough year they have had this was totally unacceptable. It was also clear to us that Elmbridge Council’s own processes for approving licenses are woefully slow and unfit for purpose. The Council needs to get its own house in order before increasing the cost of the service it provides to taxi drivers.”

As usual the Administration is continuing to tinker around the edges with fees and charges, rather than finding innovative ways to cut waste and generate income.