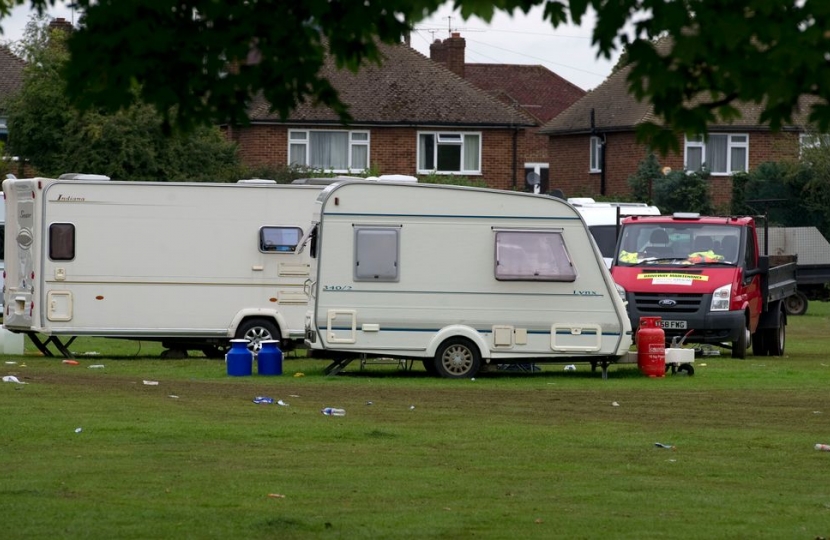 Conservative-controlled Elmbridge Borough Council has been granted a protective injunction banning the setting up of unauthorised encampments and fly-tipping on all identified public land.

The three-month injunction, granted at the High Court this week (Thursday 16 August), covers more than 150 of the borough’s parks, open spaces and car parks.

The Council evidenced large-scale fly-tipping and the cost of clearing it, damage to gates and barriers, lost parking income and the large increase in the number and size of recent encampments as well as the significant impact on communities living adjacent to each encampment and the loss of community facilities during the summer.

This year has seen an unprecedented increase in levels of unauthorised encampments, totalling 27 on public parks and open spaces as well as other recent encampments on private owned land such as Painshill Park. The size of these encampments has also risen dramatically with some encampments being over 60 vehicles in size.

The injunction prevents any individual from occupying land and/or depositing waste as well as stopping anyone from entering, or occupying any part of the land for residential purposes, including caravans, mobile homes and vehicles. It will also prevent the Council from having to obtain court orders for the removal of these encampments, which can take several days to obtain, and will authorise High Court enforcement officers to move people on if they take no notice of the injunction order. Failure to do so can result in imprisonment, fines or seizure of assets.

Leader of the Council and Tory group leader, Councillor Tim Oliver said: “I am delighted that the painstaking work undertaken by Officers and Members of the Council to collect evidence has enabled us to make a case for an extensive ban on unauthorised encampments and that the Court has given its backing to the Council. In doing so the injunction will bring huge relief to our residents and local businesses who have experienced unprecedented and wholly unreasonable disruption throughout the summer. We will now carry on with the work we are doing to review the security of all of our open sites so that our communities can enjoy their surroundings, whilst continuing to closely monitor any illegal activity across the Borough.”

Superintendent Andy Rundle, on behalf of Surrey Police, said: “Police powers are very specific and prescribed and do not cover civil issues, which we know can sometimes be frustrating and confusing for our communities. However, in relation to recent events, we are now hopeful that with this injunction in place we can respond proactively to the concerns of local residents and reduce the negative impact of unauthorised encampments upon the local community.”