David Hodge: 'I make no apologies for standing up for Surrey' 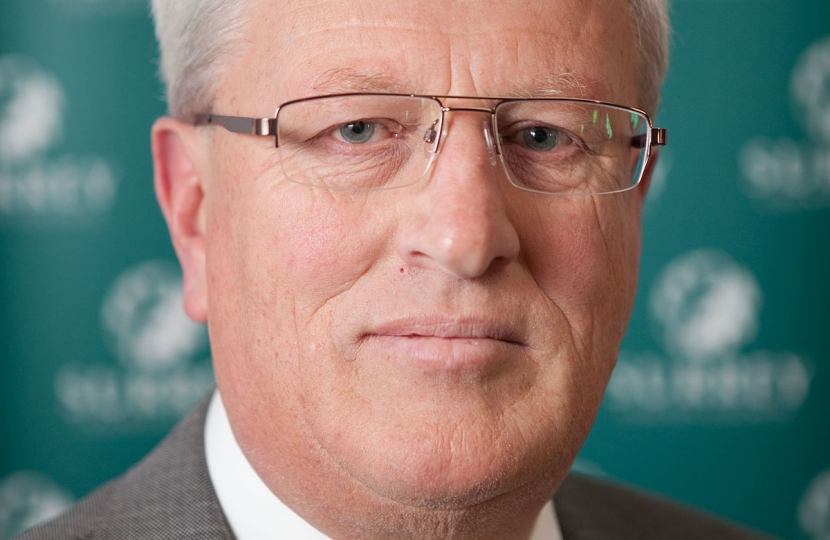 Councillor David Hodge, leader of Surrey County Council, sets out the reasons why he called off controversial plans to hold a referendum on putting up council tax by 15% to tackle the soaring cost of social care.

David writes: On Tuesday 7th February Surrey County Council in full and open session took a decision to raise Council Tax by 4.99% rather than an increase of 14.99% which would have triggered a referendum. I would like to explain the way in which the Council arrived at that decision.

Our task was to get the best we could from Government, keep council tax as low as possible and yet still maintain critical services. That was a real challenge and one that I as a Conservative leader was not going to duck or refuse. After much consideration I formed the view that the Government had listened and that I could therefore recommend the lower council tax option to Council and thus avoid a referendum.

Last October the County Council requested that I, as Leader, approach Government and seek improvements to the County’s future funding. This followed the Government’s offer to all Councils of a four year deal out to 2019/20. What was not publicised in the national press was that SCC in that “deal” was to be penalised by Government. In accepting the deal Surrey Residents would have to find £17 Million to refund to Government every year from April 2019 resulting in an extra 3% Council Tax on every household in Surrey. I was not prepared to agree such an outrageous proposition.

At the same time the Government had also changed the rules on the allocation of financial support from the Better Care Fund – a fund designed to help Local Authorities bring health and adult social care closer together. The Government launched a national fund of £1.5 Billion.  Under the normal needs criteria SCC would qualify for 1.66% of that fund - generating some £25M annually for Surrey. But Government changed the formula. Surrey will now get the lowest amount in the country with only £1.5M. So Surrey residents will be £23.5M worse off, equal to 4% in council tax per household.

Last year the Government agreed that Surrey should receive a grant of £70m annually to offset the annual cost of £168M that SCC residents contribute towards looking after 3,765 adults with significant learning difficulties. This time last year the Government deducted £20M from that grant and after strong representations we received an extra grant of £12M to compensate Surrey residents. Disappointingly this trend is continuing and again this year SCC will lose a further £32M in 2017/18 and even bigger cuts in years to follow. Of course we still need to look after those same 3,765 residents. How do we do this with less money?

Not everyone is “rich” in Surrey and many elderly residents need our support. The demand for Adult Social Care in Surrey grows significantly every year. That demand alone costs the County an additional £24M every year before factoring in the ever rising cost of delivering services in Surrey.

We at the County Council have long been urging Government to undertake a Fairer Funding Review. The funding mechanism for the allocation of central funds to local government was designed by Labour nearly 20 years ago. It unfairly skews funding away from councils like Surrey. Government has now accepted the case for a review and it is likely the Government will make changes in 2020/21 when new arrangements for the retention of Business Rates by local authorities will come into place. It is certainly time for a change and it’s time to end unfairness.

My Cabinet colleagues and I spent five months requesting our Surrey MPs and key Government Ministers help in securing a fairer deal for Surrey’s residents now. We provided them with all the data and charts which set out the unfairness of funding for Surrey. Surrey residents pay some of the highest levels of council tax in the country with central government paying in only 20%. Successive governments over the last 20 years have for instance favoured London councils meaning that London residents just over the county boundary pay less and yet receive more.

While nearly all accepted our case the constant message from Government was there was no money left. But we did not give up. I continued to take Surrey's case forward. I make no apologies to anyone for standing up for Surrey residents. As the decision date of Tuesday 7th February drew closer we intensified our efforts. We did not want a 14.99% council tax increase and we did not want a referendum.

In the end there was no “deal with Government”. But Government gave us greater reassurance on fairer funding in the future and most significantly ultimately agreed that Surrey could become a pilot for the new Business Rates Retention in 2018/19, subject to “due process”. We had wanted this in 2017/18 but regrettably there was no parliamentary time available to make this happen.

This pilot proposal together with a greater reassurance on adult social care provision enabled us to recommend to Council a council tax of 4.99% including a Social Care element of 3%. I was delighted that most County colleagues accepted the lower tax proposition though disappointed that Lib Dem and Independent Councillors voted against.

We now confidently expect to work with Government on the new business rates retention model. I hope this will bring a better financial settlement to the whole of Surrey and that this will be the key to keeping council tax at a sensible level in the future.

This final decision for 4.99% still requires significant cost reductions to be made this coming financial year of £123m – a huge sum to find in 12 months. Some of the decisions may be painful.  But we believe that we have greater funding assurance going forward and that accepting this now was better than the alternative of a 15% council tax. There are risks in this decision but we do have a very real chance at fairer funding in the future. On balance I believe that we have got it right for the residents.

It was worth standing up for Surrey.