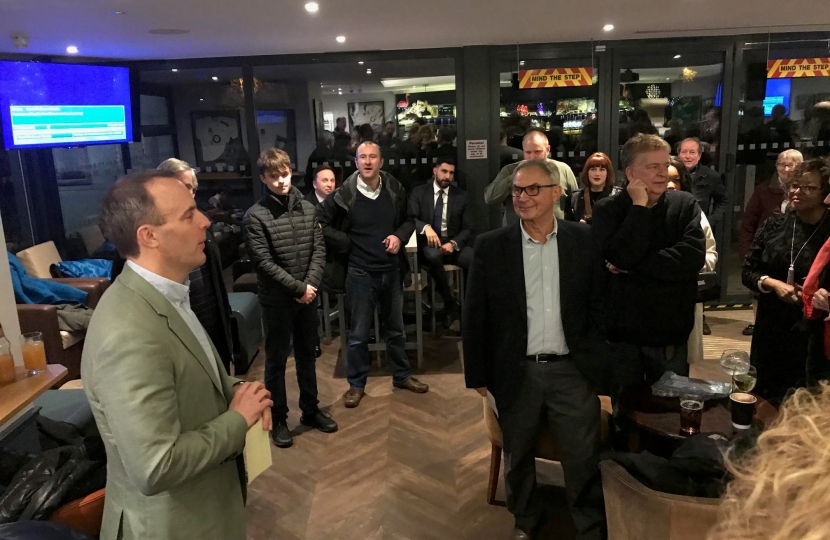 Dominic Raab has been re-elected as your Conservative MP for Esher & Walton. We thank the constituents of Esher & Walton for their support.

Dominic received over 49% of the vote and a majority of 2,743 over the Liberal Democrats, with Labour in third place on 4.5% of the vote.

The full results were as follows:

In his victory speech at Sandown Park, Dominic thanked the Returning Officer and his team for their efforts. He also praised his supporters, and his wife Erika for her unstinting love and support. He said: "I'm hugely proud to be returned as the MP for Esher & Walton with 49% of the vote share. I'm proud that when some of our opponents steeped into the gutter we kept our integrity and focused on the positives - positive change for our community and positive change for our country. The people of Esher & Walton have now spoken.  It is a huge privilege to serve them for five more years. I look forward to renewing that pledge and that commitment today. To work with everyone in our precious community with a heartfelt resolve to bring our country together after the divisions of Brexit and with a determination to get Britain out of this rut. To get Brexit done and unleash the fantastic potential of this amazing country."

As Dominic has remarked, to be a Conservative means "scaling the mountain and after wards looking ahead to the next peak". We will pause for Christmas and in the new year we will be working hard to regain control of Elmbridge Borough Council at the next election in May. Please, if you haven't already joined the Party, consider doing so and join us in that effort, to build a better future for our borough and country.

On behalf of Dominic and the team, thank you for your support. We wish you a Merry Christmas and Happy New Year.