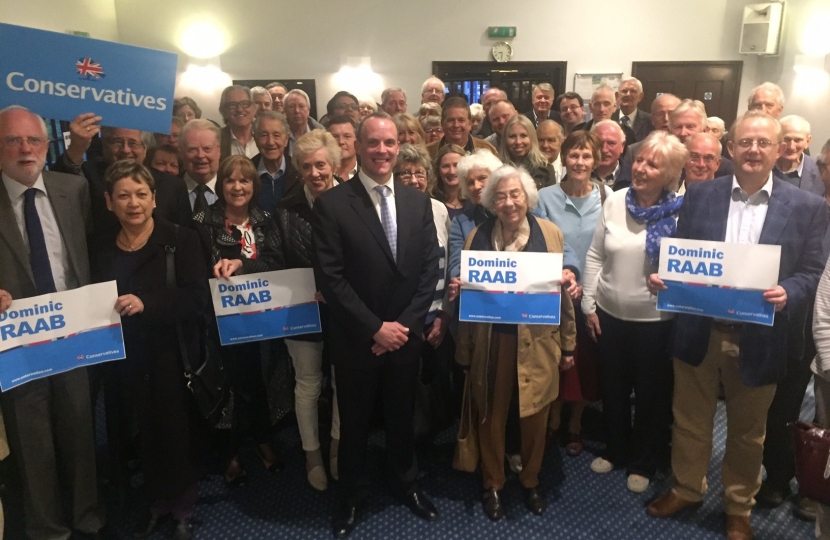 Conservative members in Esher and Walton constituency have voted unanimously to adopt Dominic Raab as the party’s candidate for the General Election on Thursday 8th June.

Dominic has served as MP for the constituency since 2010 when he was elected with 58.9% of the vote. He increased this to 62.9% at the 2015 elections, giving him a majority of 28,000 over his nearest rival, and served as a Justice Minister in the government headed by David Cameron.

The selection meeting was held at Churchgate House Centre in Cobham on Tuesday 2nd May.

Dominic addressed a packed hall and pledged to “not take anything for granted” and to work hard for every vote. He called the election a “huge opportunity” to strengthen the government’s majority and mandate, which would put the UK in a stronger position in the forthcoming negotiations with the European Union. Dominic said he will reach out to all residents, regardless of how they voted in last year’s referendum. He also sees the next parliament as an opportunity for a strengthened Conservative government to reinforce our strong economy, build a more meritocratic society and tackle burning social issues including social care for our elderly residents.

Dominic said: "I am honoured to stand for re-election as the Conservative candidate to represent the constituency I call home, and which I love. I am proud of our record of cutting taxes for families, securing investment for two new local secondary schools, and opposing attempts to build on the Greenbelt. And I look forward to making the case for the strong and stable leadership that a Conservative government under Theresa May will give our country."

Esher and Walton Conservative Association (EWCA) chairman, Tim Grey, added: “It was of no surprise that our excellent constituency MP has been re-adopted by the membership. It is a pleasure to work with him and I look forward to another fruitful five years. We will be campaigning hard for every vote for Dominic between now and election day.”