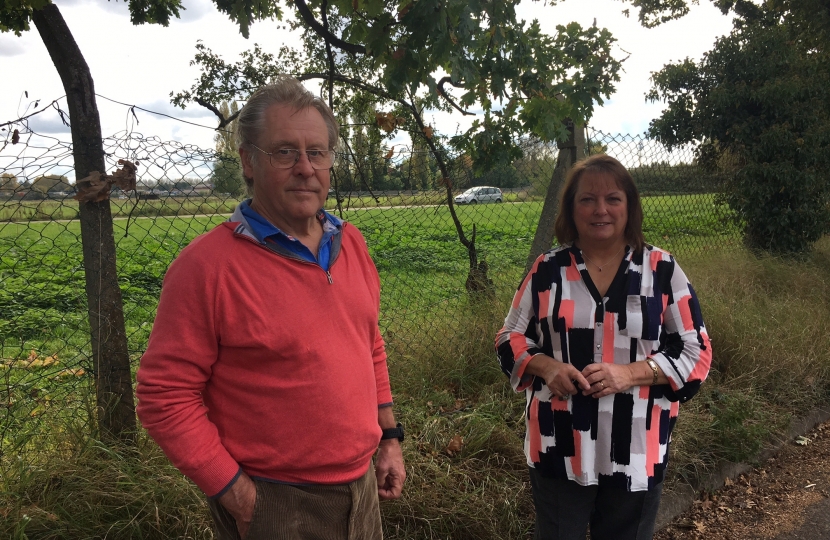 Elmbridge Borough Council is preparing to defend itself at a planning appeal brought by the developer which wants to build the Drake Park scheme in Walton.

Bonnar Allan failed to secure planning permission for its proposed 1,024-home ‘garden village’, on 70 acres off the Molesey Road, in November last year. Nineteen councillors, including Walton South Conservatives Malcolm Howard and Chris Cross (pictured at the site), unanimously rejected it, but the developer has lodged an appeal, which will be heard by a planning inspector at the Council offices in Esher on Tuesday 31 October. It starts at 10am and is expected to last for up to two weeks.

Malcolm said: "The Council sent a strong signal to Bonnar Allen last November that this scheme is not wanted in Walton. There were four main grounds for our opposition but the strongest of these was, and remains, the Green Belt. This land is highly significant as one of the last remaining green buffers separating Walton, Hersham and Esher and preventing continuous sprawl from London. I thought that last year and my opinion hasn’t changed. I know the Council will put forward a strong argument."

Bonnar Allan lodged its appeal in May and will have been encouraged by two of the reasons for refusal having since been overcome.

Surrey Wildlife Trust and Natural England had ecological concerns at the time of the decision. However, the land’s SNCI (Site of Nature Conservation Importance) status has been reviewed and subsequently removed. Subject to appropriate mitigation measures, the Walton News understands that this reason has been overcome.

Surrey County Council (SCC) objected based on the neighbouring Weylands Treatment works, due to the adverse effect it would have on new residential properties, and the possible restriction to the future operation of waste treatment. However, we have recently learned that SCC and the applicants have agreed mitigation measures where there would be an enhanced buffer zone of 50m and the nearest houses would be sited further away from the waste site.

The County’s Highways department raised strong objections based on the effect on existing traffic that an additional one thousand homes would generate (objections which the Walton Conservatives share). SCC remains dissatisfied by Bonnar Allan’s claims in relation to bus services and improvements to Hersham Railway Station.

Cllr Chris Cross added: "The land should be kept for farming, leisure or sporting facilities only. The proposed development will have a severe impact on local infrastructure and traffic, which already tails back towards Molesey on very busy days and often grinds to a halt."