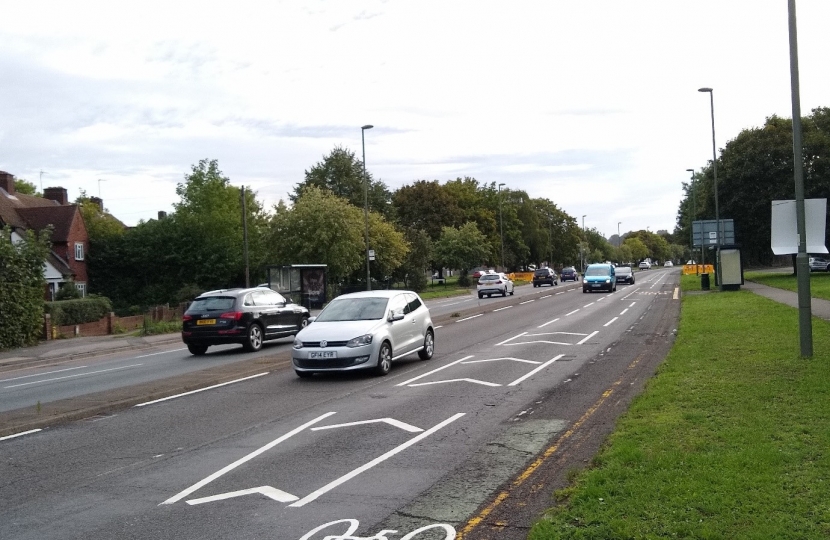 At its meeting on 16 November, the Elmbridge Local Committee unanimously approved a proposal to move to the next stage of the trial and install three pedestrian refuges to improve the safety for people crossing this dangerous road. This initiative followed the tragic death of a pedestrian which resulted in a near 3,000 signature petition last year calling on Surrey County Council to take action to address this issue.

For the last three months since the road became one lane in both directions (reverting to two lanes in the approaches to the Princess Alice and Barley Mow roundabouts), traffic flows and speeds have been closely monitored.

The scheme has not had any significant impact on traffic congestion.

The impact on reducing speeding has been marked. Whereas the 40mph speed limit was previously broken by a large number of motorists – sometimes massively – the new arrangements have seen the limit being overwhelmingly observed. The three pedestrian refuges will improve safety still further. As Surrey police noted in their observations to the Committee:

“The scheme has certainly brought speeds down, which is good from a road safety point of view.

There were no hold ups at the time of the Police’s site visit.

There doesn’t appear to be an obvious desire line for pedestrians. The provision of three pedestrian crossings in different locations to coincide with the bus stops corresponds with the likely pattern of pedestrian movement.

The pedestrian crossings were not constructed at the time of the visit, and so it is not possible to comment directly on their operation. However, pedestrians are currently crossing the single running lane and cycle lane, with the adjusted traffic flows and speed. The Police would consider it safe to proceed with the three pedestrian crossings….”

This view fully accords with that of Surrey’s own highways safety experts.

The organizers of the 2019 petition have also given their full support to the scheme.

The installation of the refuges is planned to take place before Christmas.

The decision to proceed is not a final outcome, but a continuation of the trial. Sometime next year, should there be a recommendation to make these arrangements permanent, a full public consultation will take place. Those results will be brought to the Local Committee for a decision.