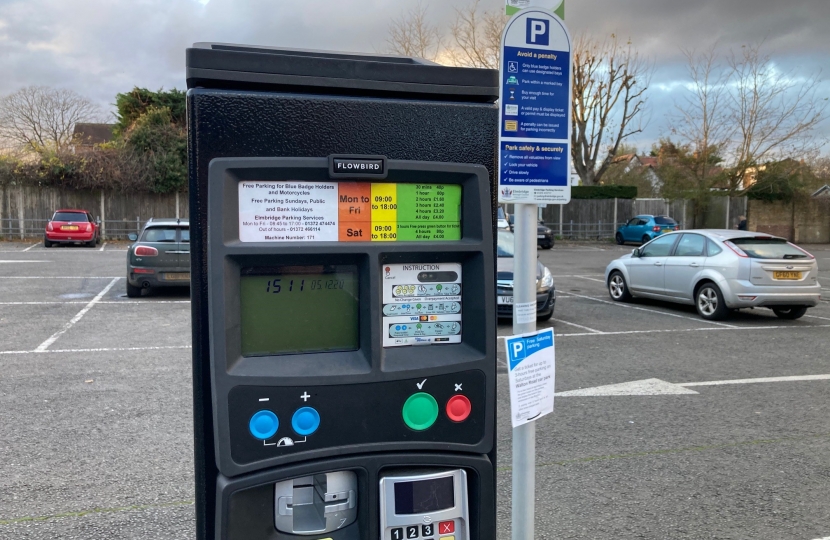 Elmbridge residents will pay more to use the borough car parks from this week, after the Residents Association and Liberal Democrat controlled council increased charges.

The council's eight-party ruling coalition brought forward proposals at the 2 December Full Council to put up fees and charges to claw-back income lost during the pandemic. These include a 10p across the board rise on all tickets and reducing Saturday free parking to 1 hour.

They also voted down a Conservative amendment which would have softened the blow for our small shops and businesses. This was despite the RA parties campaigning for election in 2019 on a platform of scrapping planned parking rises.

Conservative councillor David Lewis put forward an amendment to retain 30 minute ticket options in the borough's 10 village car parks. He explained: "Small convenience stores and retailers depend on customers being able to park, and pop in to buy a newspaper of pick up a prescription. If you take the Steeles Lane in Oxshott, the current charge is 40p. If we were to retain the 30 minute option it would go up to 50p but if we accept the recommendation from the cabinet that 40p would become 90p - a 125% increase.

"In Weybridge the increase would be even greater, at 150%. The feedback I'm getting from the small shops is they really rely on people parking for a very short period of time and removing the 30 minute ticket would be detrimental. Those businesses have done an incredible job in supporting our residents over the last few months."

His Conservative colleague, Cllr Barry Cheyne (Oatlands) agreed that 30 minutes parking is a lifeline for small shops, and warned: "If some of these fail, that's going to impact on the council as if those shops sit empty for a period of time the council is poorer for it in every way."

And Cllr Rachael Lake (Walton North) cautioned that residents parking for 10 or 20 minutes won't mind paying for half hour, but when faced with a hour's charge some might "chance it" and not to pay at all - the council could lose money!

All this fell on deaf ears with the Administration. The RA Leader of the Council, Cllr Stuart Selleck, said what was important was the "broader picture" of the council's finances and called for the Conservative amendment be rejected. His Cabinet colleague Cllr Chris Sadler went even further, claiming that Cllr Lewis deserved to be “laughed out” of the council chamber for his attempt to protect local businesses.

The Conservative group will be seeking election in May 2021 to restore competent and prudent finances to Elmbridge Council with a fair and pragmatic approach to the needs of our residents.