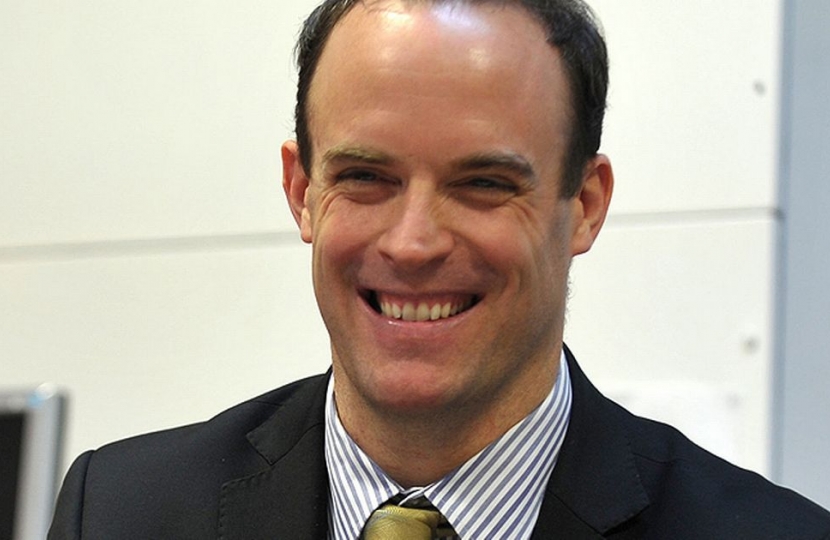 Conservatives must learn the lessons of the disappointing June election and “come back fighting”, says MP Dominic Raab.

Dominic addressed an audience of Esher & Walton party members on 14 September and gave an update on his local priorities, as well as the Westminster scene and his new role as a Justice Minister.

At the general election he won a third term as our Member of Parliament with 58.6% of the vote and a majority of 23,298 over Labour. Whilst an excellent result locally, it was against a disappointing national backdrop where the government lost its overall majority.

Dominic said: “The election result is talked about a lot at Westminster. My view is we’ve got to show we’ve learnt the lessons and come back fighting. We obviously need to do more on housing as this will be a key issue in future. Our tone needs to be more aspirational and we need to get across that Conservatives are more than just bean counters. We need to give young people in particular a sense that our better days lay ahead.”

In Elmbridge, the Conservatives have an opportunity to take back control of the Borough Council in May 2018. It has been run by a coalition of seven political residents associations and the Liberal Democrats since 2016 with little to show for itself aside from putting up councillor allowances and the botched introduction of a new waste contractor.

Dominic reminded listeners that the administration had “put up council tax, put up their expenses, put up proposals to build on the green belt and can’t collect the bins on time”, adding that he is looking forward to helping with next year’s campaigns. On the subject of Surrey County Council’s financial position – where the cost of adult social care is rising each year as government grant to the council falls – he said Surrey Tory MPs have had constructive talks with Philip Hammond, the Chancellor on a way forward.

Continuing the theme of local matters, he said the long-running issue of overcrowding on the South West Trains service will be tackled by a new contractor, which is providing new rolling stock. And 1,000 people in Walton, Molesey and Thames Ditton are now eligible for flood insurance, where they weren’t previously, after Dominic took up their cause. The Elmbridge Fund, which he started to finance local improvements, is continuing to gather contributions from local businesses and entrepreneurs. Finally, thanks to the Conservatives’ free school programme, a new state secondary school is opening in Walton-on-Thames in September 2019 and two existing schools Three Rivers (formerly known as Rydens) and Cobham Free School are getting new buildings.

The fact that youth unemployment is down by 40% is also something to shout about, said Dominic, adding that the government had cut corporation tax and raised £8bn more in revenue.