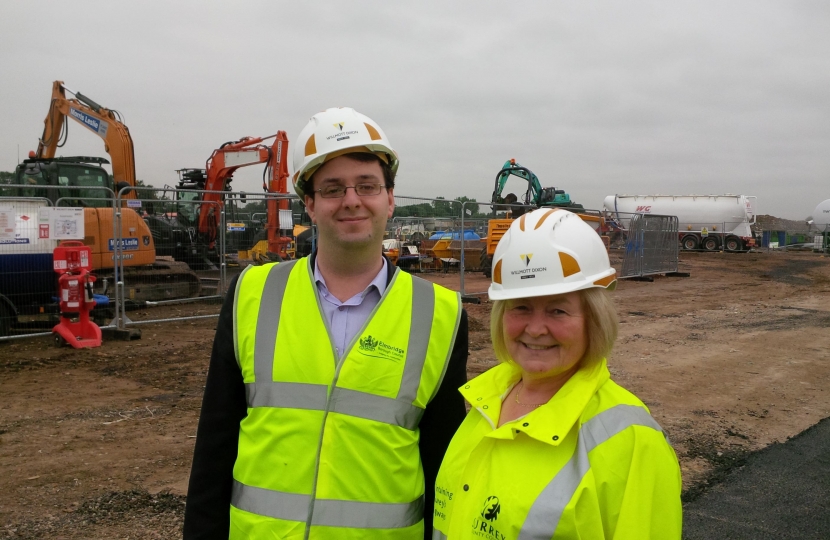 The construction of the new Sports Hub in Waterside Drive is currently taking place with the focus being on the remediation of the contaminated site.

It will be a home for Walton & Hersham FC, Walton Casuals FC and Walton Athletics Club. There will also be a children’s playground and dog walking area. It is on schedule for completion in September 2017.

More information and regular updates are available at www.elmbridge.gov.uk/sports-and-health/elmbridge-sports-hub.

There was uncertainty about the future of the Sports Hub after the May elections when the Residents’ Associations (RAs) (including the Walton Society) and Liberal Democrats formed a coalition administration to run Elmbridge Borough Council.

The RAs had previously opposed the Sports Hub and the connected redevelopment of Stompond Lane, but in July the new administration confirmed they would continue with both projects.

Walton North ward councillors Rachael Lake and Andrew Kelly visited the site in September. Andrew said: “Although I’m pleased that the Coalition are continuing with the Sports Hub project, it is     surprising to see the Walton Society Councillors so quickly ditch their long-standing opposition to the proposals now they are in power. Even more shocking is their support for the redevelopment of Stompond Lane. Clearly for them, election promises mean nothing.”

Rachael said: “Although I’ve spoken against this development over many years, most of my major concerns have now been addressed.”