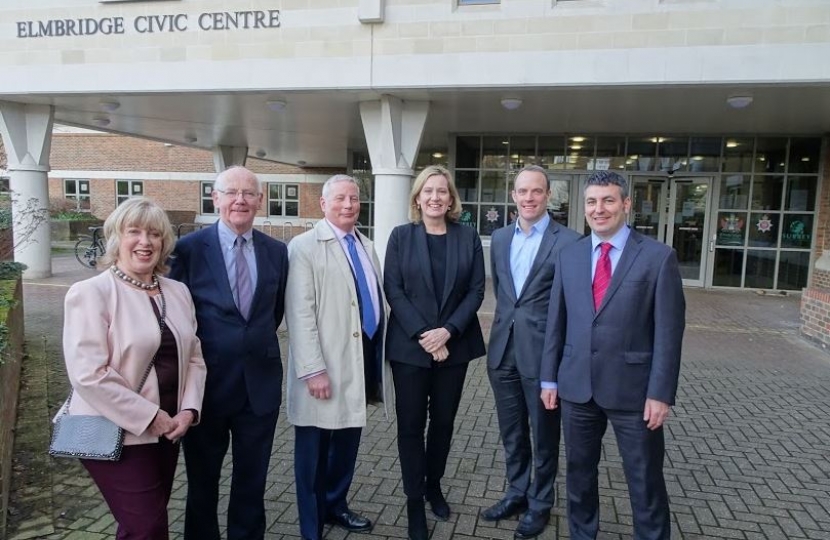 The Rt Hon Amber Rudd MP called at the Civic Centre on Friday 19 January to get an update on policing issues from Surrey's Police and Crime Commissioner, David Munro, and with local officers. This included a Public Spaces Protection Order (PSPO) put in place in Walton town centre this month to crack down on anti-social behaviour.

The Home Secretary was interviewed by getsurrey, and spoke about increased money that the force will be receiving this year. She said: “I’ve just had a meeting with the Police and Crime Commissioner and the Chief Inspector and heard about their plan to increase the number of police on the street and increase their spending on equipment. The new police settlement really gives Surrey Police and every other police force the opportunity to increase spending and target that where residents want to have it, so I think Surrey Police force is a good local story."

Hersham Village Conservative candidate Ruth Mitchell raised her residents' concerns about unauthorised traveller incursions. Ruth said: "I discussed with her the problems we had in Hersham last year with numerous incursions. In particular the upset caused by the level of fly tipping and the £20,000 + cost to taxpayers. I was encouraged when she said she is having discussions with the police about the powers they need or can use in order to resolve this."

Steve Bax raised with Amber Rudd the concerns in Molesey about a recent spike in burglary, and suggested that strengthening neighbourhood policing and a more visible police presence would be welcome.