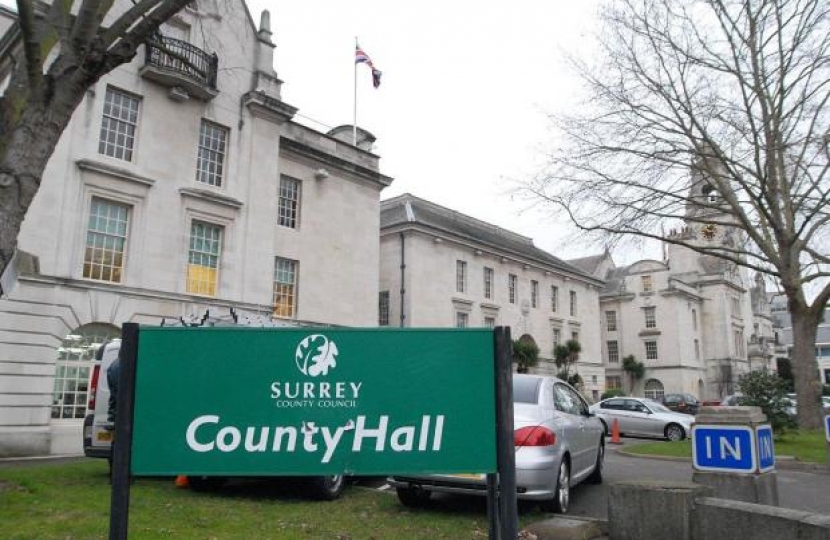 Conservative Surrey county councillors have rejected an independent panel's recommendation that cabinet allowances should increase by 8%.

Instead they voted for a freeze and this, coupled with the scrapping of new councillor pensions and payments to committee vice chairs, has saved taxpayers £225,000 this year and going forwards.

The financial pressures facing Surrey were recently highlighted by Cllr David Hodge, leader of the County Council. He quoted Local Government Association estimates that, by 2020, government funding to councils will have reduced by £16 billion. Surrey is one of the hardest hit. Despite reducing costs by £450 million to date, it still has to find a further £104 million in savings this year, and faces an overspend of £21 million.

He said: “It is crucial that every resident understands the funding challenges. 70 per cent of the budget is spent on Adults and Children’s Social Care and these are services that are facing huge rising demand. That leaves just 30 per cent of our budget to deliver every other service, like highways, waste and libraries, which we know are all really important.”

Surrey cares for the largest number of people with learning disabilities in the UK. These residents have complex care needs and the number of people needing support is up 36 percent over the last five years. Yet Government funding for learning disabilities is facing a £32 million shortfall this year. At the other end of the spectrum, demand for high need Children’s Services also continues to rise, adding £6.8 million to the budgeted costs.

Mr Hodge added: “It is time that Government properly funded Surrey County Council to provide the services that our residents need. Let’s remember the £11.2 billion pound net contribution that Surrey’s taxpayers already make to the Exchequer every year. I have never asked for a special deal. Only a fair deal for Surrey taxpayers. The County Council has made the case for fair funding to our Surrey MPs. We have provided the facts, which speak for themselves. The case for fair funding is indisputable.”

Leaders of all 12 borough councils in Surrey will make a joint bid to become a Business Rates Pilot in 2018/19. This could bring significant financial benefits for the Surrey and see further joint working, cooperation and decision-making between the County and the Districts and Boroughs. The pilot is only for one year - but it would be an important step towards fairer funding for Surrey.

Several county councillors in Elmbridge had made commitments to freeze or reduce councillor allowances in their election campaigns earlier this year. One of those, East Molesey's Cllr Peter Szanto, commented: "I'm delighted I was able to deliver on my manifesto commitment on 10 October when the Conservative Group chose not to accept the remuneration panel's recommendations. In these challenging times we need every penny to maintain services. If only we’d had a Conservative administration at Elmbridge Borough Council, where Lib Dem and Residents Association politicians awarded themselves a 12.4% increase in their councillor allowances.”