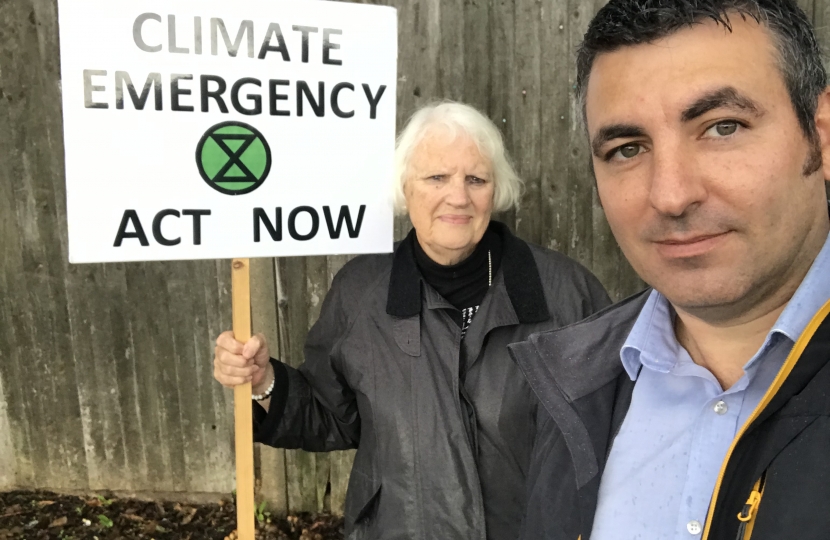 Conservatives recently supported a motion for Elmbridge Borough Council to declare a ‘climate emergency’ and pledge to become carbon neutral by 2030.

Local environmental campaigners cheered the declaration from the Council's public gallery in July. They included Christine Crispin, an East Molesey resident who has been outside the council offices in Esher every Friday with a banner, highlighting the need to tackle global warming.

She is pictured here with her local Conservative councillor Steve Bax, and said: "I went to hear Greta Thunberg at Easter and started thinking about what more I could do. The idea to sit outside the council offices came to me like a thunderbolt! I am not doing this for me but because I care about the world we are leaving to our children and grandchildren."

The motion stated that Elmbridge Borough Council believes all levels of government (national, regional and local) have a duty to limit the negative impacts of climate change and “should not wait for national governments to change policies”. A significant proportion of our population lives on low or flood plain areas which would be severely impacted by more frequent and extreme rainfall.

Cllr Bax said: “I recently met with Christine to congratulate her on her campaigning, and discuss further steps the Council can take, for example providing electric car charging points and promoting new builds to the ‘Passive House’ ultra low emissions standard - which means they are better insulated and address fuel poverty as well as their carbon footprint.”

The Council’s cross-party Energy and Sustainability Working Group is scrutinising plans to eliminate Single Use Plastics from the Council and through its procurement process, as well as promoting community schemes such as reusable ‘Boomerang Bags’ and water refills at businesses.

A report setting out how the Borough will meet its objectives will be put to the Council in February and will build on existing initiatives.

The Prime Minister's letter on Coronavirus: Stay at home to protect the NHS and save lives.

Read the Prime Minister’s guidance everyone should follow and the measures the government has put in place to fight Coronavirus.