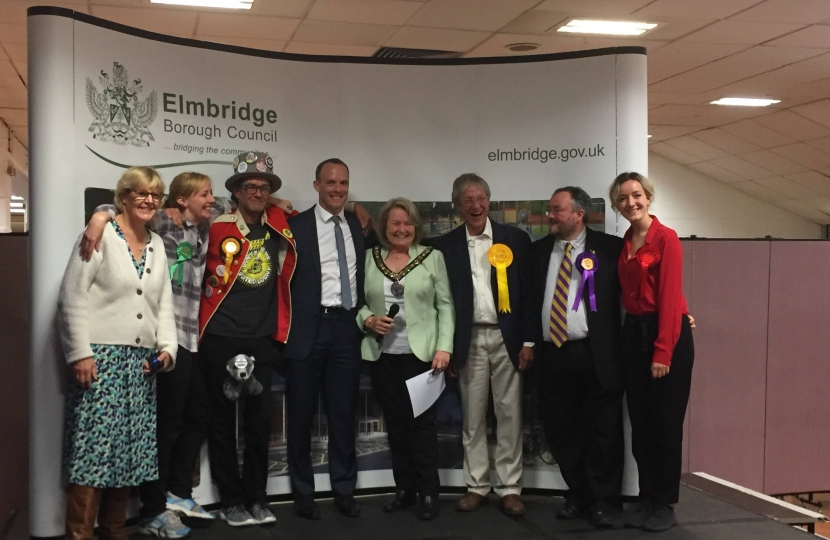 Dominic Raab has declared himself "delighted, honoured and humbled" to have been re-elected as MP for Esher and Walton.

Dominic lives in Thames Ditton with his wife Erika and young family and has been the local Conservative MP since 2010.

He said: "I am delighted, honoured and humbled to have been re-elected in the early hours of this morning. I gained almost the same number of votes as in 2015, and was returned with a majority of over 23,000. I look forward to taking forward the plans I set out during the campaign for extra school places, better local rail services and more NHS services in the community."

While overall it was a disappointing night for the Conservatives nationally, overall the party won more votes than Tony Blair and Labour did in 1997 and are still the largest party by far in the House of Commons in the new parliament.

"I expect Theresa May to form a government with support from the DUP, so we can provide some certainty and take the country forward in the Brexit negotiations, maintain a strong economy, and protect our national security in light of the recent terrorist attacks," added Dominic.

Tim Grey, Chairman of Esher and Walton Conservative Association, led the congratulations. He said: "Dominic achieved a great result and I'm delighted our vote held up in the constituecy. In Esher and Walton the turnout was at 75.4% as high a figure as I can remember. That is testament to the dedication and work of all our volunteers and activists."

Go here for the full results.