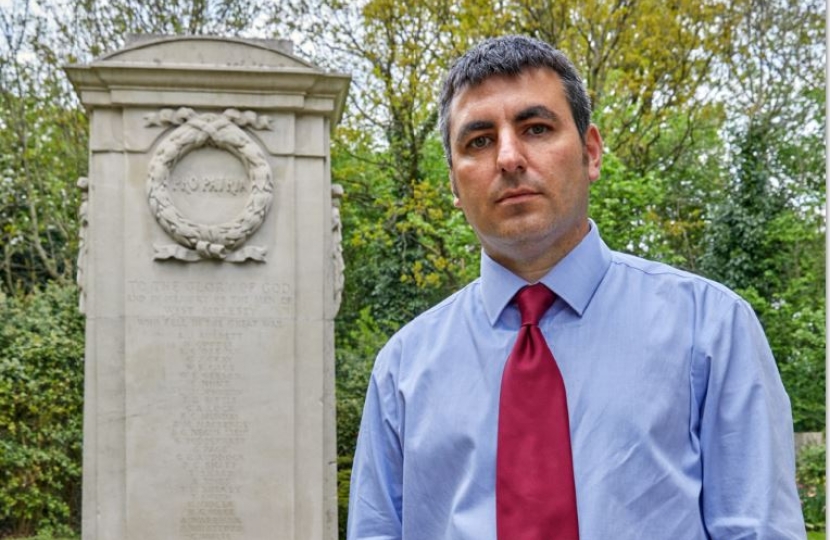 Steve Bax, the Conservative candidate for West Molesey, has challenged the area's incumbent councillor to explain why he has failed to deliver a memorial for Molesey's fallen Second World War heroes after 13 YEARS.

He has accused the Residents Association county councillor, Ernest Mallett, of dragging his heels over the project which he has presided over since 2004.

It comes after the Surrey Advertiser quoted a 90-year-old veteran from Molesey of the D-Day landings who feared he would go to his grave without seeing the names of his fallen comrades honoured on a memorial in their town. And a woman whose mother donated money to the memorial project in her will is also concerned by the delays.

Last year Mr Mallett promised two granite slabs with the names of Molesey's WW2 dead inscribed would be installed at the West Molesey Memorial (pictured above with Steve Bax) in time for last November's Remembrance Sunday but his assurances came to nothing. Incredibly Mr Mallett is still listing his involvement with the memorial committee in his leaflet as a reason for voters to re-elect him!

Steve is also challenging the Residents Association party's candidate over his leaflet which lists historical accomplishments from decades ago and says nothing of current issues or what he would do in future if re-elected.

Steve said: "Where does our councillor stand on the need for a secondary school? What are his views on the proposals for the future of Molesey Hospital? What will he do about the current, unacceptable situation at Glenlyn Medical Centre where patients are waiting over a month to see a GP? I have met three times with practice leaders, and the MP, to raise concerns and regularly flag the issue in my Molesey News publication.

"In the last year we have seen Mr Mallett use his position as county councillor to dismiss a petition signed by over 80% of residents and retailers in affected streets for parking controls, he has clashed with Hurst Park Residents Association and caused it to suspend its affiliation and accuse Mr Mallett's party of 'not representing the interests of Molesey people'. And we have had Residents Association councillors and Liberal Democrats voting themselves an outrageous 12.4% increase in their personal allowances at Elmbridge Council.

"The old cliche about time for change has never been more apt in West Molesey. I hope voters exercise their prerogative on Thursday and teach Mr Mallett and the Molesey RA party that they can no longer take West Molesey for granted."