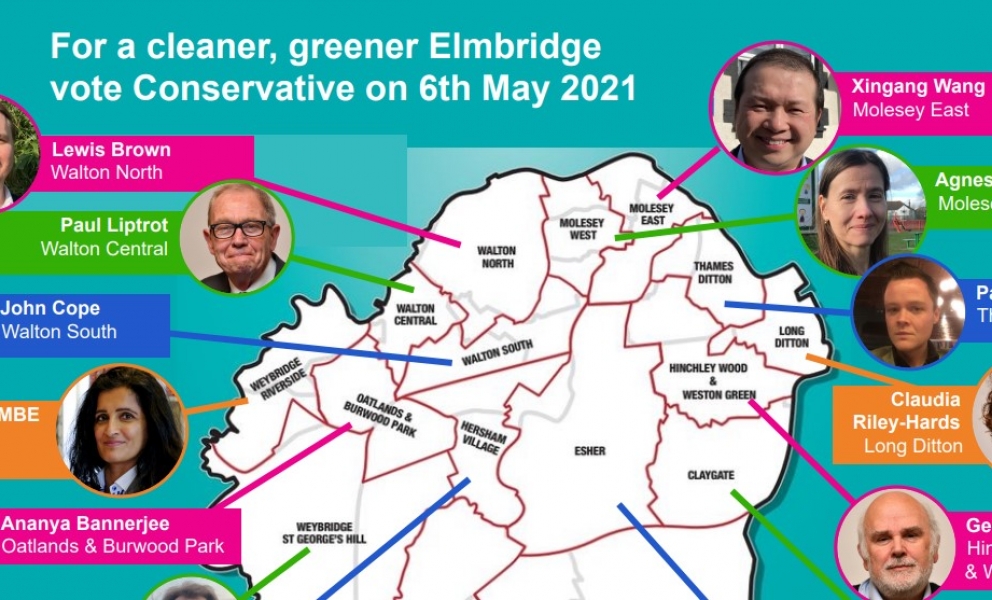 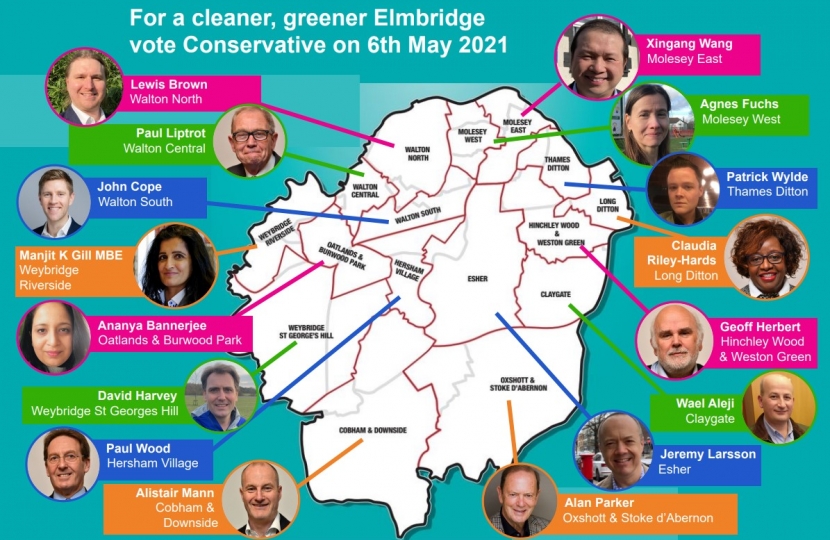 Wael is a psychologist and a researcher on human rights issues. He is a proud local resident and values Claygate's history, its independent businesses and community organisations. He describes himself as an "experienced listener and communicator" - qualities which are essential in a local councillor. If elected, his priorities are to champion vulnerable residents and the local shops, to defend the Green Belt and to make Claygate cleaner and greener.

Alistair is Chairman of Cobham Chamber of Commerce and led their campaign against proposals for Pay and Display in the High Street. He is involved with a number of other local organisations including the Cobham Green Belt Group. Alistair believes Elmbridge Council can be a strong partner to support local shops, including by establishing a Business Improvement District. Alistair is campaigning for a review of car parking charges and improving pavements.

Jeremy wants to protect green spaces and ensure that Elmbridge Council is run more efficiently with lower taxes and better services. He has a background in senior leadership roles, including as Managing Director for a financial tech firm. Jeremy has two daughters at local schools and is a governor of Esher Church School. He currently advises small businesses and charities. He says: "The Resident Association and Liberal Democrat coalition running Elmbridge Council has lost control of the Council’s finances and this has led to Council Tax rises and local services under the threat of cuts. Only the Conservatives can get the finances back on track."

Paul believes the past year has presented huge challenges and local government must rise to the challenge of helping society to recover. He believes that local services will always be under finance pressure, so councillors must focus on delivering excellence and efficiency. Before retiring, Paul held senior roles within major businesses, and if elected he will work closely with Hersham's Conservative councillors and our MP to provide a joined-up service for residents. His priorities are Hersham's shops, local environment, listening to residents and delivering value for money.

Geoff has lived and worked locally his whole life and knows Elmbridge issues very well. He is determined to preserve the Green Belt and the local environment, while resisting intensification. Geoff believes local communities should decide where new housing goes. His priorities also include support for the voluntary sector, more visible policing and working as part of a Conservative team to tackle potholes.

Claudia's top priority is to preserve the Long Ditton Green Belt. Previously, Elmbridge Council under Liberal Democrat/Resident Association control has consulted residents on using releasing this Green Belt to meet housing demand. As part of Conservative Council, Claudia will resist excessive annual housing targets to preserve the character of Long Ditton, while using her background in economic development to promote council policies that support our local shops and businesses, and apprenticeships for young people.

Xingang is a part time magistrate - a role he took on to set an example of community service to his young daughters - and has previously worked in engineering and accounting. He grew up in China but became a British citizen after studying for a master’s degree in London. Xingang's priorities are to resist the overdevelopment of Molesey, protecting and enhancing our riverside, and supporting the high streets in Walton Road and Bridge Road. He supports keeping Vine Hall open and opposes the Jolly Boatman development.

Agnes lives in the ward, on Walton Road, and has children at local schools. She worked as a librarian in Budapest, where she grew up, and since settling in Molesey she has been working as a nursery practitioner. She says: "I love living in West Molesey. It is so calm and green, with welcoming people." Her priorities for the council are to regenerate local playgrounds, support the redevelopment of Molesey Hospital and campaign for a bus service to the new secondary school for Molesey pupils, which is being built on land next to Xcel in Walton.

Ananya is proud to have been selected as the Conservative candidate for her home ward – Oatlands & Burwood Park. She has lived in Weybridge for nearly nine years and understands the local issues. Ananya's background is in planning and design. She is a trained architect and director of a national planning practice. Ananya believes that Oatlands and Burwood Park, in being situated between Walton and Weybridge offers the best of both worlds. If elected as the area's Conservative Councillor Ananya will protect the village's unique identity and bring her experience to the service of the Council and assist residents with their needs as part of a joined up Borough-County Conservative team.

Alan is a former Chief Executive Officer of a FTSE 100 company and has been a chairman and non-executive director for international companies. Putting people first has been a priority throughout Alan’s career and his CBE was awarded for services to industry. He will use his experience to ensure council services are delivered more efficiently to benefit residents, and drive out waste. Alan wants to ensure residents feel safe in their homes secure from outside intrusion, overcrowding and excessive through traffic.

Patrick lives in Thames Ditton and wants to ensure it remains one of the best places to live in Surrey. He works in the construction and maintenance industry and has a strong interest in responsible local development that compliments complements an area. Patrick will support and enhance the local environment and resist over-development, working as part of a Conservative team to push back against excessive housing targets. Patrick wants to support small and independent shops, particularly if a Lidl supermarket goes ahead on Portsmouth Road.

Paul is a former journalist and a resident of Walton for more than 30 years. He knows Walton and its people well and will be a strong voice for the town at Elmbridge Borough Council. Paul will protect the conservation area and green spaces. He is pleased to see new independent shops opening in Walton town centre after such a tough year. He wants to make sure the new Business Improvement District set up in Walton sustains this. Paul intends to work closely with Cllr Christine Richardson and both of Walton's Surrey county councillors as well as our MP Dominic Raab as a strong local team to improve local roads and parks and ensure more visible policing.

Lewis grew up on Cambridge Road and lived on St John's Estate as an adult. He is a former Grovelands School pupil and has five years' experience as an Elmbridge councillor. He is keen to ensure local streets and parks are cleaner and litter free and will help shops, including along Terrace Road, to flourish. He wants to see a Conservative administration at Elmbridge to keep taxes low and standards high. Lewis said: "I know local democracy may be the furthest thing from our minds as we look forward to resuming life, but your vote really can make a difference this May."

John has spent a decade working in education and apprenticeships, and wants to help the Conservatives regain control of Elmbridge Council so that all of Walton can benefit from our plans for a cleaner, greener borough. John notes that the council is relying on reserves and voted in February to put up council tax, despite receiving extra money from the government. He says: "Now is not the time to raise taxes, especially as so many small businesses and residents have been hit financially by the pandemic." If elected John will also improve the Halfway Green and Severn Drive park, support Halfway shops and campaign to keep car parking charges low.

Manjit has lived in Weybridge for 14 years and has a background in international business development. Seven years ago she founded an international charity to promote menstrual dignity and she mentors young people and women. Manjit believes in traditional values, service and original thinking. She wants to speed up the redevelopment of the Weybridge health centre site and help rejuvenate the high street.

David lives in Weybridge with his wife El and their twin sons. His priorities are to regenerate the High Street and Weybridge Hospital, and delivering a cleaner, greener Weybridge. David will protect the Green Belt and oppose inappropriate development. He will work with the Conservative team to improve cycle routes and make roads safer. David disagrees with Liberal Democrat/Resident Association decision to charge residents to use tennis courts and will campaign to reverse this. He will protect council services by repairing the finances.